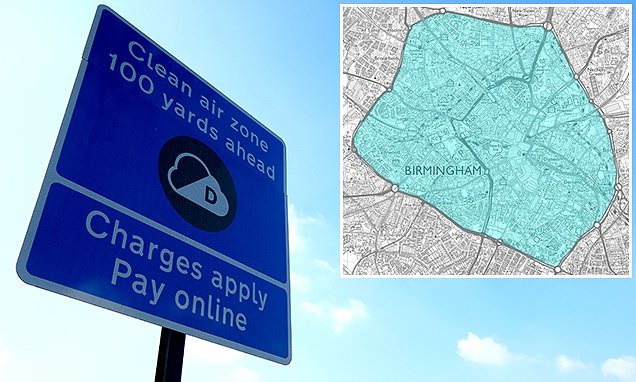 The city of Bath will be the first place to have the new CAZ charge scheme, which will begin there on 15 March 2021.  The £9 daily charge will be applicable for non-compliant taxis and larger vehicles such as coaches, buses and lorries will need to pay the much higher fee of £100 a day.

The next UK city to have the scheme will be Birmingham, on 1 June 2021.  The fees differ in Birmingham, at £8 daily cost for cars and motorcycles.  However, for larger vehicles the fee will be the same as Bath, at £100 daily.

Just like the London ULEZ (Ultra Low Emission Zone) charge, both of the new CAZ charge zones will operate 24 hours a day, 7 days a week and 365 days a year.  This does mean, if drivers happen to be driving in the zone just before midnight and continue to be in the zone after midnight, they will need to pay for 2 days.

For driver in Birmingham, the new CAZ charge zone will operate within the A4540 Ring Road.  Non-compliant vehicles will need to pay the daily £8 charge, these are Diesel vehicles that are not the Euro 6 emission standard.  For petrol vehicles, the charge applies if the vehicle doesn’t meet Euro 4 standards.

The enforcement for the scheme, will be come by ANPR cameras.  This means non-compliant vehicles who do not pay the daily charge will face a penalty of £120.

In Birmingham, it is estimated that around 25% of the vehicles currently entering the zone will not be compliant.  Drivers of non-compliant vehicles would either need to avoid the zone, change their vehicle or pay the daily charge which can be expensive if you drive in the zone daily.

There are only some limited exemptions on the Birmingham CAZ charge.  For example, minibuses that transport children to school or are for community services will not have to pay the daily CAZ charge.  Birmingham council have said that the money raised from the CAZ charge will go towards investing in the local transport network.

The proposed CAZ charge for Leeds was scrapped and instead taxi drivers were provided grants to change their vehicles, which in turn reduced the air pollution.  Which is a great initiative and should be looked at by more councils across the UK.

The Bath CAZ charge will run roughly around the A4 and A36 in Bath, see the map below as there is no clear Ring Road around Bath.

In London, there will be an expansion to the existing ULEZ in October 2021.  The current zone runs within central London, but this will be extended to the North and South Circular.